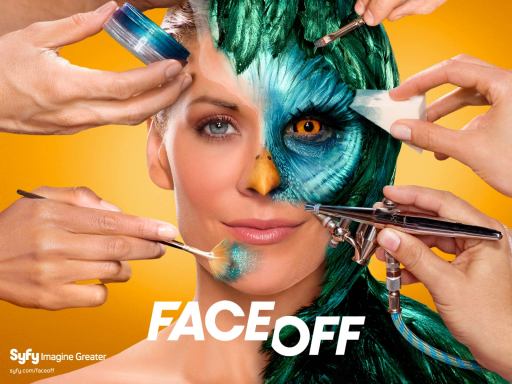 NEW YORK – March 18, 2013 – Syfy’s critically-acclaimed hit reality competition series Face Off will return for a fifth season of mind-blowing special effects ingenuity, offering a new group of rising SFX make-up artists with the opportunity to compete and showcase their imagination and creativity. Production on the new season begins April 2013 in Los Angeles for a Summer 2013 premiere.

“Face Off continues to prove itself as a ratings hit, earning critical and viewer accolades alike, and we are proud to bring the series back for another stunning season,” said Mark Stern, President of Original Content, Syfy, and Co-Head of Original Content, Universal Cable Productions.

Season four of Face Off currently airs Tuesday nights at 9PM ET/PT on Syfy. In its fourth season, Face Off is averaging 1.6 million viewers 18-19 and 2.7 million total viewers in Live +7.

Defiance is an epic drama that will unfold as both an original series and a multi-platform video game – the first-ever convergence of television and online gaming, featuring an interconnected world between the two mediums as they evolve together into one overall story. The artists learn that the world of Defiance features a myriad of incredible aliens and that their Spotlight Challenge is to create the offspring of two of them. To help inform and inspire their makeups, they are surprised with a trip to Toronto where they visit the incredible set of Defiance. After meeting the cast and crew, they excitedly head back to Los Angeles to get started on their designs. When they return to the lab, the reality that this is their last chance to make it to the finale is palpable, and their frayed nerves show as each of them struggles to bring their huge concepts to life. It all leads to an incredible showing on the Face Off reveal stage where their alien creations are presented to special guest judge,Defiance director Michael Nankin.

The competition culminates with the season four finale on Tuesday, March 26 at 9PM ET/PT when the final three contestants face the incredibly difficult task of creating waterproof makeups for the spectacular show, Le Reve: The Dream at the Wynn Hotel in Las Vegas.

Face Off is a competition/elimination series exploring the world of special-effects make-up artists and the unlimited imagination that allows them to create amazing works of living art. As a member of the multi-generational family dynasty whose name is synonymous with the make-up effects field, actress McKenzie Westmore brings expertise to her role as host of the series. Some of SFX world’s most celebrated figures return to judge the competition — multiple Academy-Award winner Ve Neill (The Hunger Games, Pirates of the Caribbean), industry veteran Glenn Hetrick (CSI: New York, Heroes, Buffy the Vampire Slayer), and creature designer Neville Page (Avatar, Prometheus). World-renowned Hollywood makeup artist Michael Westmore serves as the contestant mentor.

Face Off is a production of Mission Control Media with Dwight D. Smith, Michael Agbabian and Derek Atherton serving as executive producers.

Syfy is a media destination for imagination-based entertainment. With year round acclaimed original series, events, blockbuster movies, classic science fiction and fantasy programming, a dynamic Web site (www.Syfy.com), and a portfolio of adjacent business (Syfy Ventures), Syfy is a passport to limitless possibilities. Originally launched in 1992 as SCI FI Channel, and currently in more than 98 million homes, Syfy is a network of NBCUniversal, one of the world’s leading media and entertainment companies. (Syfy. Imagine greater.)

Originally from Rochester, New York and has lived in Las Vegas, Nevada since 2003. Aside from being a huge fan of movies and television, he's a huge fan of Sci-Fi and in particular, Star Trek.
View all posts by The Anti-Nerdist →
This entry was posted in SyFy, TV NEWS and tagged competition, face off, reality, science fiction, SciFi, syfy, television, television series. Bookmark the permalink.